I am pretty good at trivia games. I can play Cranium, pick the Data Head category and get the answer right more often than not. My wife usually gives me a look like “WTF…why do you know that?” I usually give her a look like “I have no idea, it just popped into my head and sounded right.” Realistically, it is probably because at some point, I was in a class somewhere, doodling away and barely paying attention, and the fact just stuck in my brain for later trivia use. 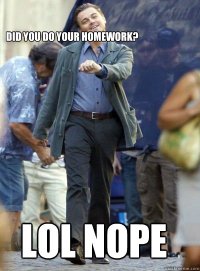 I make a conscious effort to remember this when I see how my oldest kid is doing in school. Am I concerned that he is labeled “behind” in things like reading and writing? Not in the slightest. I know what I was capable of, and when I started to get things. I know he will most likely be just as smart, if not smarter, and he is already doing better in school than I did. I didn’t read a single book until I was out of high school. Is that something to brag about? Maybe not, but the point is that I wasn’t interested in anything being taught in high school.

So what does this have to do with art? I have been trying to tweak some things about my drawing and painting process – namely the fact that I need to think more while working. I have a daily journal that I write in on a regular basis to reflect on my progress as an artist and other things I encounter in life. I think as a result of not paying attention in school and doodling all the time, I developed the bad habit of letting my brain drift to Nowheresville when I draw. It became so natural for me to just pick up a pen and scribble on whatever scratch piece of paper was there while I let my brain drift, that my brain now just automatically does that everytime I start to draw or paint.

I am fairly certain I am not the only one that suffers this affliction. As a new artist, there is this preconceived notion that your pencil or brush should hit the canvas or paper and everything will just work itself out. No thought required – insto presto, image made. Okay, maybe not quite that bad, and hopefully nobody out there thinks that is really how it happens. But I remember being a little surprised about all the things I needed to think about and process while doing a painting because art is supposed to be easy and fun. It makes no sense to me now why that was surprising.

Even now, when I am warming up or drawing, my mind will start to drift and I will just let my hand do what it does. I don’t do this nearly as much as I used to, but I still find myself doing this if I am tired, feeling drained, and no ideas are coming to me. When no ideas are coming is probably the best time to just let your hand do the work, until you see the sparks of inspiration. However, success occurs far more often when I at least have some idea of a direction I want to go with an image.

I have been working pretty hard on the design side of my images lately, which requires quite a bit of brainpower while working. This goes directly against the practice of letting your brain drift, because you need to consciously think ahead of each mark you make. This was something I only started doing in the last few years. Before that, I usually just threw some marks down and responded to them.

Getting a successful image without preplanning before hand is a difficult thing to do as a beginning artist. There are so many fundamental elements that go into being able to consistently produce successful images. It is difficult for the brain to process all that information in a short amount of time without referencing anything or doing any kind of study.

It is very similar to what athletes talk about when they move up a level in a sport. When high school football players transition to college, they talk about how much faster the game is. The same happens when college players progress to the NFL. Eventually, after a few years of experience, the game starts to slow down. The brain is able to process all the information from practice and film study in fractions of seconds. When a player is in the zone, you can see it happening before, during, and after plays.

The same thing holds true for artists. When you are new to art and someone asks you to paint a picture of a subject called dino rhino or imaginary wetland in only 30 minutes, odds are that it is going to look like crap. Those 30 minutes are going to fly by, and you are going to look at the canvas afterwards and ask yourself wtf just happened. I know that is exactly how I felt a couple years ago when trying to do 30-minute speed paints on random subjects.

Every painting sucked, there was no edge control and every color was flat. The values were garbage and the light seemed to come from everywhere with god rays flying in from god knows where. I would like to say I stuck with it, but that would be a lie. I gave up on those quickly. However, I have recently started doing them again and the results are much better now. 30 minutes no longer fly by. In fact, I often have about 5 minutes to spare to clean things up a bit.

Brain power, dedication, and time are the keys to becoming a successful artist. Everything about becoming a good artist is earned through thought and never given to you with no effort. Remember that and you should be alright.